The psychology behind your financial personality

We'd all like to save a little more money, but it never feels as easy as it should. Many of us, it seems, just aren't hard-wired to do it. Our habits, inclinations and character traits undermine our best intentions time and time again. We call these traits our "financial personality".

We've teamed up with Dr. Frank Ryan, author of Willpower for Dummies, to dig a little deeper into the psychology of saving.

The fundamental challenge with saving money is that it forces us to put off the nice things we could have immediately in order to gain something we’ll appreciate later on.

“Saving, on the other hand is more about the long-term. The rewards and benefits of saving are deferred. Sometimes, saving is for a “rainy day” – not so much for a reward or pleasure such as a fun holiday but more as a way of reducing the impact of unwelcome events such as unexpected bills for the home or the car.”

So what’s the answer? Willpower. But there’s a lot more to willpower than just rolling up your sleeves and getting on with things. In fact, the reason so many of us struggle with willpower is because we don’t understand it properly.

Dr. Frank describes willpower as “the uniquely human ability to think not just of the short term ‘now’ but the long term ‘later’, whether it’s a deposit for a first home of your own, the reassurance that you will be able to maintain it, or simply having a holiday of a lifetime.”

We tend to think of willpower as something we either have or don’t have, but the truth is somewhere in between.

“You’re probably thinking ‘I don’t have enough willpower’. The truth is nobody does! You can learn to improve and focus your willpower on what matters most.”

Think of willpower as a limited resource: you have a certain amount of it, and, just like your money, you have to “spend” it wisely. One way we can conserve our willpower is to limit the number of decisions we give ourselves to make.

“Making too many decisions in a short time scale leads to a phenomenon that psychologists call ‘willpower depletion’, a kind of brain fade where you make poor choices due to reduced control over impulses. Making good, balanced decisions requires willpower. After repeated decision-making your willpower can be reduced and you can make the wrong choices – those that seem okay in the short term but less so in the long term.”

The people who seem to have the most willpower are usually the ones who simply force themselves to use it less often. They do things automatically, removing themselves from situations that force them to make sensible decisions.

What makes a spender?

“Impulsive or excessive spending is a product of the interaction of several personality traits. A cluster of characteristics linked to impulsivity, seeking out exciting new experiences and being social or a ‘party animal’ are linked to excessive spending.

“In contrast, personalities that prefer familiarity, planning ahead and predictability are more likely to be savers than spenders. Most people are a unique mixture of these characteristics – something that hopefully makes us all interesting and unique.”

So you can’t become a natural saver overnight any more than you can change your personality overnight. Instead, your aim should be to understand your personality and impulses, and manage them – not get rid of them altogether.

“We develop our own strategies and priorities that work for us most of the time. By definition, personalities don’t change, or at least don’t change in fundamental ways. This means that if you are an impulsive spender reading this will not suppress the “I want it now!” impulsive component of your personality. You will still have the impulses to spend but you can learn ways to manage those impulses, and turning those into saving impulses is the way to go.

“Psychologists recognise that people vary as individuals in terms of personality but they also recognise that the situation you’re in is also influential. For example, if you are an impulsive shopper but you are not within sight of tempting bargains, or you are not carrying a credit card, you have managed the impulse!”

Habits and impulses, and how we can manage them

Ultimately, we’re not trying to change our habits and impulses – they’re part of who we are. We’re simply trying to understand and manage them.

If our personality dictates the things that tempt us, our best bet is to understand and avoid the situations where those temptations are at their strongest. Dr. Frank explains:

“By definition, habits are enduring patterns of behaviour that are goal-directed and can proceed automatically without much conscious thought. Compulsive habits like spending (or addictions like smoking or gambling) are motivated habits and harder to reverse than personal preferences.

“For example, a person might prefer to shop at Tesco but could change this long-term habit to shop at Sainsbury’s if they moved house. But if they were a compulsive shopper the compulsive shopping habit would continue regardless of the shop because it is highly motivated and harder to stop.

Willpower, then, is less about overcoming massive amounts of temptation, and hinges instead on understanding our personalities and temptations and putting ourselves in better situations.

“Willpower, especially if it is required to overcome compulsive habits like spending or personality traits such as wanting new things or new experiences, is a weak method of control. In the face of temptation we can all become sinners!”

So fear not, spenders: by making simple changes to your behaviour, you can significantly decrease your spending. Dr. Frank has put together a few tips to show you how.

This guide is intended as a summary only and does not constitute financial or legal advice given by Leeds Building Society. No reliance should be placed on this guide and you must make your own decisions. 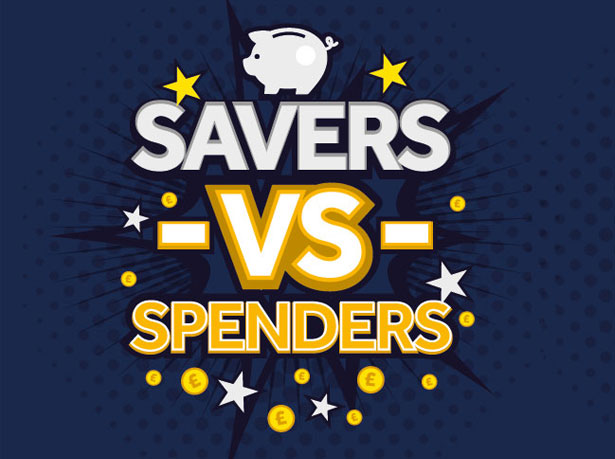 The Spenders vs Savers Challenge

We recently set four bloggers a 4-week Spenders vs Savers challenge with the help of psychologist and expert in willpower, Dr. Frank Ryan. Let’s find out more about the bloggers and how they got on…

How to become a good saver: Dr. Frank Ryan's tips

To become a saver, you must master the unique art of ‘willpower’. Dr. Frank Ryan, author of Willpower for Dummies, shares his tips.