/consumer/press/press-releases/2013/article.page?
Skip to content
You are here:
Back to November 2013 Article created: 7th November 2013

Get on your bike in the North East and East Anglia!

Leeds Building Society colleagues in the North East and East Anglia have recently been successfully participating in a number of cycling based fundraising events.

In the North East, the Society’s Durham branch raised money for the National Autistic Society by completing a sponsored bike ride from Chester Le Street in County Durham to the Sea Front in Sunderland and returned via a circular route (A total distance of 30 miles). The ride took in many highlights including Sunderland’s Stadium of Light (see photo attached). Taking part were all the staff of Durham Branch: Mandy Forster (Branch Manager), Chris Newcombe (Assistant Manager), Lynn Mitchenson and Shaun Marsh (Customer Service Advisors), as well as Barry Jameson (Regional Operations Manager) and Anthony Sowerby (LGFS Consultant). Overall the branch raised a total of £871 for the National Autistic Society, including match funding provided by Leeds Building Society.

Also in the North East, Jonathan Epworth (the mutual’s branch manager in Blyth) again took part in his annual Coast to Coast cycle ride, raising a massive £1,282.32 this year, bringing his fundraising total over the last four years to a fantastic £3,257.32! Jonathan donated the money to his chosen charity, Marie Curie Cancer Care.

The Society’s team at the Norwich branch donned their high visibility jackets and took part in a 26 mile ride in aid of Nelsons Journey; a charity that supports children who suffer from a family bereavement. They are still collecting money from sponsors but believe they will raise approximately £2000! 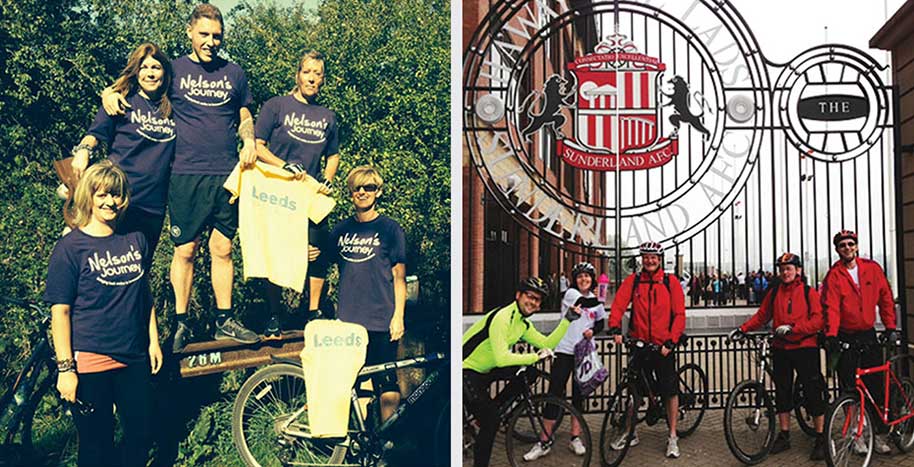 Pictured Right - Durham branch team outside the Stadium of Light, and the Norwich branch staff ahead of their cycle ride for Nelson’s Journey. Leeds Building Society has assets of £10.8bn (as at 30 June 2013) and 67 branches throughout the UK, Gibraltar and Ireland. The Society has operated from the centre of Leeds since 1886.