/consumer/press/press-releases/2013/article.page?
Skip to content
You are here:
Back to December 2013 Article created: 2nd December 2013

Leeds is the award winning Society

Leeds Building Society has received three prestigious awards at recent ceremonies. Firstly, the Society received the ‘Innovation Award for Lenders,’ and was named ‘Best Intermediary Lender’ at the Mortgage Finance Gazette (MFG) Awards. This was followed by the mutual winning the flagship award of ‘Best All Round Mortgage Provider’ at the 2013/2014 Personal Finance Awards, in association with The Money Pages and What Mortgage.

Announcing Leeds Building Society as the winner of the ‘Innovation Award for Lenders’ category Joanne Atkin, Editor of Mortgage Finance Gazette said, “Leeds Building Society launched the first ever 0% interest mortgage in July 2013. Deemed as the first of its kind to be seen in Britain, the ‘Welcome Mortgage’ has taken the market by storm for its ability to provide outstanding customer service through commercially responsible lending. With much of the media asking ‘what’s the catch?’ Leeds Building Society has stood proud in the fact that there simply isn’t one. The amount the customer pays is broadly in line with that of an equivalent standard mortgage. Designed to be far more than an ‘introductory offer’ the mortgage rates are competitive within their market place.”

The Society also received the award of ‘Best Intermediary Lender’ at the MFG awards. The same analysis methodology was used for the whole market. They looked at all products which were generally available to intermediaries (i.e. not single intermediary exclusives), regardless of whether those products were available via other distribution methods. They also took account of the availability of Buy to Let products to the intermediary market. Leeds Building Society was also ‘Highly Commended’ in the categories of ‘Community Services Award - Large Lenders,’ ‘Best National Building Society’ and ‘Best Overall Lender’ at the MFG awards.

Following the MFG awards, an intimate awards evening was held at The Gable in London for the winners of the 2013/ 2014 Personal Finance Awards. The Personal Finance Awards started 16 years ago, aimed at recognising and rewarding the very best businesses in the UK’s personal finance market. The award voting spans a comprehensive 12 week period, with consumers dictating the process from start to finish - including the initial selection of the nominees.

The award was collected by Emma Bretton, Leeds Building Society’s Product Development & Lifecycle Manager who said, “This is a great accolade for the Society, as the process is 100% consumer driven. Furthermore, the title of ‘Best All Round Mortgage Provider’ is the flagship award of the evening.” 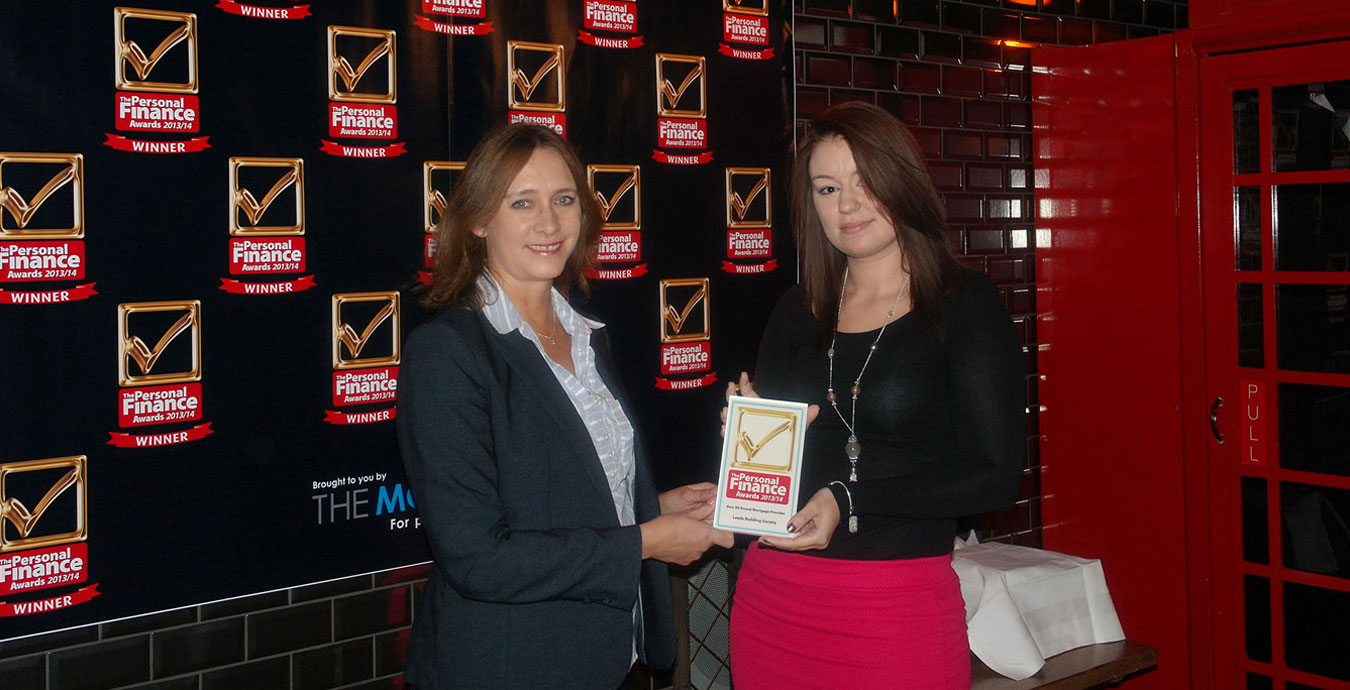 Loanne Atkin, Editor of themoneypages.com, is pictured (left) presenting the ‘Best All Round Mortgage Provider’ award to Emma Bretton, Product Development & Lifecycle Manager - Leeds Building Society (right) at the 2013/2014 Personal Finance Awards. The Mortgage Finance Gazette Awards acknowledge the achievements of people and organisations. Winners celebrated at an informal gathering in the heart of the City of London where they were presented with their awards. There are two parts to the awards - the Nominated Awards and the Product Provider Awards. The process for the Nominated Awards involves nominations from within the industry and a judging panel then chooses the winners. Product analysis methodology was used for the Product Provider Awards. Leeds Building Society has assets of £10.8bn (as at 30 June 2013) and 67 branches throughout the UK, Gibraltar and Ireland. The Society has operated from the centre of Leeds since 1886.