/consumer/press/press-releases/2015/article.page?
You are here:
Back to February 2015 Article created: 5th February 2015

Musical theatre star Jodie Prenger took time out from her starring role as Calamity Jane to accept a £25,000 donation on behalf of Age UK from Leeds Building Society. These vital funds will help Age UK support vulnerable older people across the country.

Laurie Boult, Head of Fundraising at Age UK, said: “We’re delighted with the donation and would like to thank Leeds Building Society and its customers for their support. Millions of older people are facing the ups and downs of life almost entirely alone. This donation will help Age UK to support older people where it’s needed the most, helping to tackle huge issues like loneliness and isolation.”

The donation comes from Leeds Building Society's Your Interest in Theirs scheme and Caring Saver account. Making up the £25,000, £19,000 was donated by members through the YIIT scheme where savers agree to forego up to 99p of their interest each year. These funds are then split equally between the Society’s four charity partners. The £6,000 balance of the donation came from the mutual, which donates 1% of the average balances in all Caring Saver accounts equally between these same four charity partners.

Gary Brook, Leeds Building Society’s Head of Corporate Communication said: “Caring Saver is the kind of account that appeals to your head as well as your heart. It offers easy access to your money, while also bringing benefits to people who really need it at the same time.

“The maximum that can be donated through our Your Interest in Theirs scheme is only 99p per account each year but if all our members participate it adds up to a significant amount. The money is split equally between our four partner charities on the same date as the rest of the interest is credited to their account.” 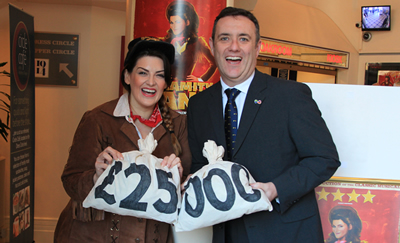