/consumer/press/press-releases/2015/article.page?
Skip to content
You are here:
Back to March 2015 Article created: 23rd March 2015

Leeds looking for seasonal items in the build up to Easter

The team at Leeds Building Society’s branch in Yeadon, at 59 High Street, is hoping residents and customers will donate Easter eggs in the build up to Easter. These items will then be given to the Save Haven food bank.

“We asked Save Haven if we could do anything to help them out with their charity, so now we have a trolley in branch to collect food for their food bank,” said Katie Howdon, assistant manager at the Yeadon branch.

“The aim of the campaign is to raise awareness of the charity in the local community. We want to collect food, toiletries and general day to day items.

“Safe Haven has given us a stand that we have set up in branch which details what food can be donated. We have also got a trolley next to the stand as the food container. We are going to also focus on collecting seasonal items, starting with Easter eggs at Easter and moving on to sweets at Halloween and finishing with advent calendars at Christmas.

“The campaign will run for the whole of 2015, and on a monthly basis a colleague and I will go down to the charity and deliver the food.

“Safe Haven does fantastic work to help local people, and we want to support their efforts by donating seasonal items in the build up to Easter.

“I hope people in Yeadon will pay us a visit to donate an item or two to our collection.”

Leigh Murphy from Safe Haven said: “Please support Leeds Building Society as they assist Safe Haven and the local aid agencies that make their applications to us.” 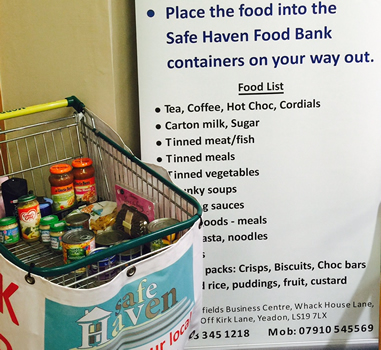 The trolley and stand at Leeds Building Society’s Yeadon branch.

Please see attached a photo of the trolley and stand at Leeds Building Society’s Yeadon branch.

The address of the Leeds Building Society Yeadon branch is 59 High Street, Yeadon, LS19 7SP. Assistant Manager Katie Howdon can be contacted on 0113 250 6313.