Michael Rhodes has been crowned overall winner of the prestigious Excellence in Action annual award at Leeds Building Society.

The prize, worth £1,000, goes to the Society colleague who has consistently excelled throughout the year and performed at a level beyond their role.

Michael, the mutual’s Service Desk Manager, has successfully challenged his team to look for improvements and efficiencies in their day to day work. He is always looking for opportunities to develop himself and his colleagues, with a number of those mentored by Michael receiving subsequent promotions within the Society.

Michael is no stranger to scooping awards for his innovative approach, after last year winning a Council for Mortgage Lenders’ (CML) competition to find rising stars of the industry.

Challenged for innovation on the theme of "If I could change the mortgage market, I would....", Michael came up with the idea for a “Mortgage Builder”. This new type of tax-incentivised savings scheme would give parents and grandparents a way to help children to build up funds from birth to enable them to bridge the deposit gap later in life when they wished to buy a home.

Michael was nominated for his latest award by Kelly Shippen, Head of Contact Centres, who said: “Michael’s reputation and the praise he receives from across the Society is exceptional. His work ethic and commitment to improving our business, his team and himself can be seen in everything he does.”

Tom Brannigan, Operational Change Manager in Business Support, added: “Michael’s passion for his role and the Society is second to none, and this is what I find the most inspiring aspect of his personality. He is never shy to face up to daunting challenges, not least his success at the CML conference in front of a VIP audience including our own Chief Executive.”

Commenting on his award, Michael Rhodes said: “To be nominated for this award was an honour. I am totally overwhelmed to have been recognised in this manner and would like to thank everyone for supporting me during the 10 years I have been at the Society.

“I really do hope that I have helped all of them in return, providing them with the support and development they deserve. I believe the phrase that best describes all of our colleagues, and expressed early on in the awards presentation, is that everyone’s a winner.” 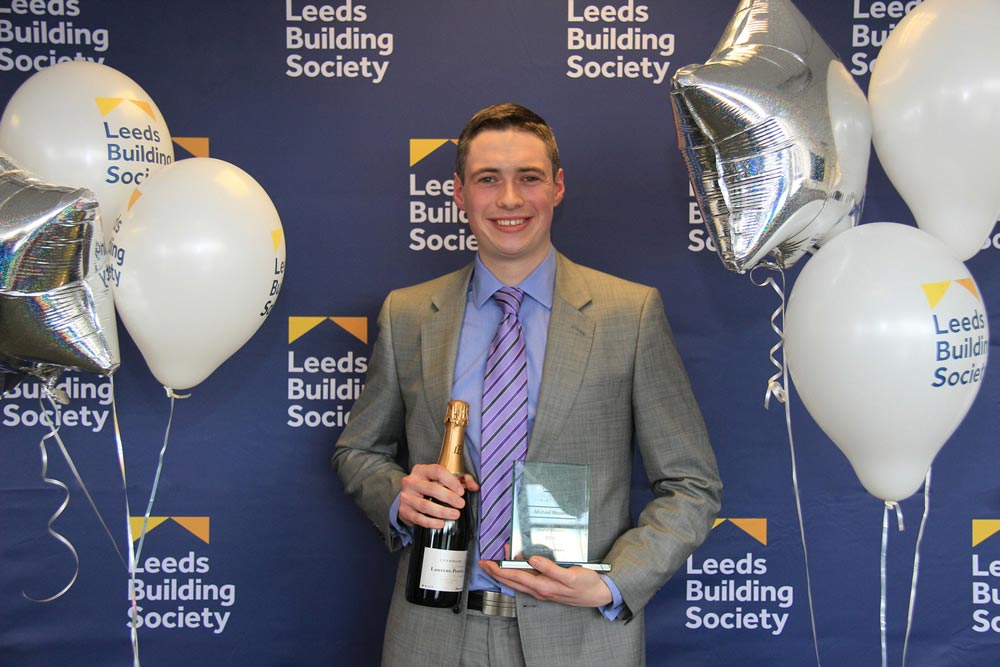 Michael Rhodes is pictured with his ‘Overall Winner’ award and bottle of champagne.