An IT database administrator at Leeds Building Society took part in a gruelling bike ride between 15 English football grounds to raise funds for a community charity in Burnley.

Steve Corrigan successfully completed the The Big Away Day Bike Ride in six days and raised £1,100 for Burnley FC in the Community - including £400 in matched funding from Leeds Building Society.

The charity will use these funds towards sports participation, education, health, social inclusion/cohesion and community facilities.

The ride culminated at Hull FC’s KC Stadium for the game with Burnley, when the team of 12 were greeted on the pitch at half time by a standing ovation to celebrate their combined fundraising total of £15,000.

Steve Corrigan commented: “It was an enjoyable and inspirational experience, covering A and B roads against a backdrop of weather ranging from hot sunshine to torrential downpours.

“I am delighted to have raised over £1,000 in in total, and would like to thank everyone who has sponsored me and Leeds Building Society for providing matched funding.”

Siobhan McNamara, Partnerships and Events Executive at Burnley FC in the Community said: “We’d like to thank Steve Corrigan and the team for their incredible efforts with The Big Away Day Bike Ride – we’ve been completely overwhelmed by their support for our charity and cannot thank them enough for getting involved.

“We know all their efforts have not only raised fantastic funds for our work but have also helped so much in spreading the word about what we’re doing here in Burnley and the local area. We hope they have enjoyed every minute. We certainly feel their half time standing ovation at the last home game was more than deserved!” 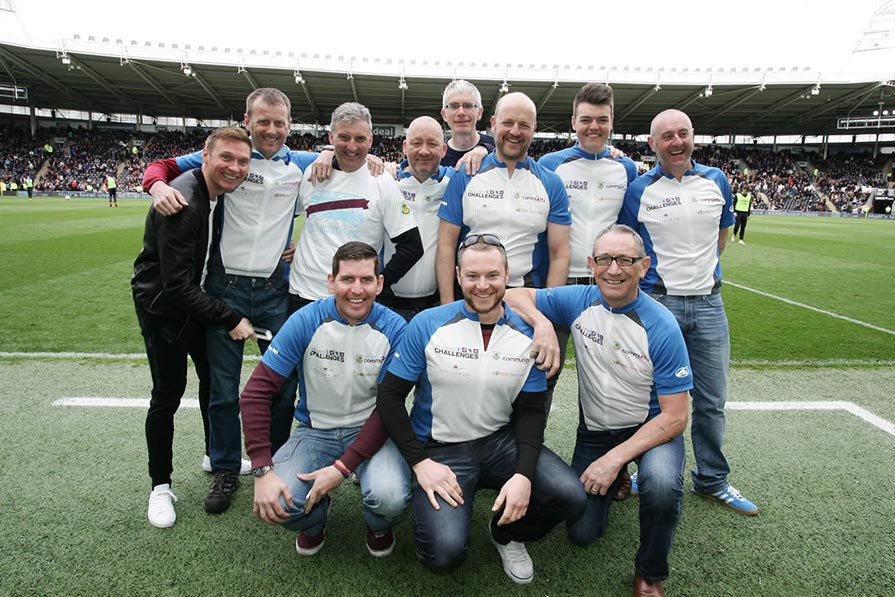 Steve Corrigan is pictured standing in the middle at the back.

Burnley FC is committed to its local community and in January 2014 created a new charity to deliver on this commitment. ‘Burnley FC in the Community’ was born with a mission to support, inspire and deliver change in the community. Projects and initiatives are taking place all over Burnley and the surrounding areas are already proving popular within the local community.