Assistant managers from Leeds Building Society's branches across Leeds have joined forces to raise £7,000 for a charity which helps local children.

These funds will help Lineham Farm provide much needed respite breaks and activity holidays at its site on Swan Lane in Leeds.

Colleagues at the Society's branches in Leeds ran tombolas, raffles, bun sales, car boot sales and competitions to raise a total of £7,000.

To celebrate this donation, five assistant managers from the Leeds area visited Lineham Farm and were joined by representatives from the children's centre and animals from the farm.

"Our visit to Lineham Farm was a fantastic morning, and we're thrilled by our total amount raised of £7,000," said Chloe Holdsworth, assistant manager of Leeds Building Society's Head Office branch.

"It was great to get a tour of the farm and see what some of the funds will go towards, as well as meeting representatives from Lineham Farm and of course the animals!"

Clare Beard from Lineham Farm said: "We are very proud of the relationship we have developed with Leeds Building Society over the years.

"They have always supported us both financially, by fundraising and sponsoring events, and equally as importantly by sending teams of volunteers to help us here at Lineham Farm.

"The benefits that their teams have brought us are huge and we are extremely grateful." 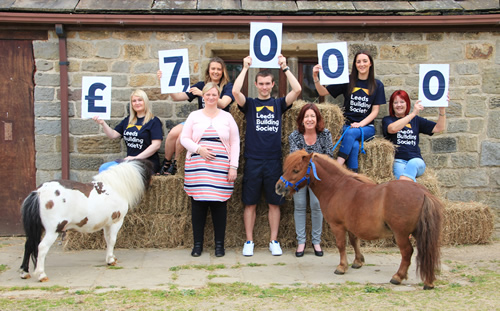 Leeds Building Society has assets of £12.1bn (as at 31 December 2014) and 67 branches throughout the UK, Gibraltar and Ireland. The Society has operated from the centre of Leeds since 1886.