A team of 13 colleagues from Leeds Building Society are cycling Coast to Coast from Whitehaven to Sunderland over two days starting on Monday 21st September.

The cyclists are raising funds on behalf of Alzheimer's Society, the care and research charity for people with dementia and their carers.

Leeds Building Society celebrates its 140th anniversary in 2015, so its Direct Distribution channel is hoping to raise £14,000 through a number of fundraising events throughout the year.

"The 140 mile distance between Whitehaven and Sunderland was chosen as a result of the Society celebrating its 140th anniversary this year.

"In addition to the Coast to Coast cycle ride all our branches are joining in the fundraising effort with their own activities, as we head towards our £14,000 target.

"Our justgiving address for donations is https://www.justgiving.com/challengeoneforty"

"The charity's fight for a better world for people with all types of dementia takes a wide range of forms, and we wouldn't be able to do the work we do without support from organisations such as Leeds Building Society. We are delighted that Leeds Building Society are taking on this fantastic challenge, and with their support, we can continue our work to improve the lives of those living with dementia." 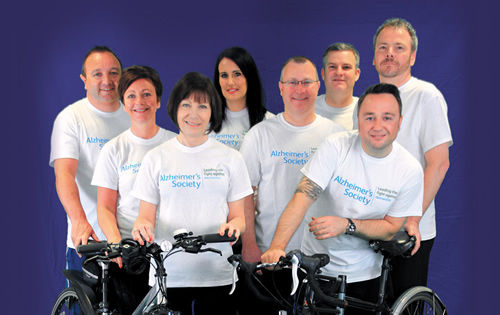 Alzheimer's Society is the leading UK care and research charity for people with Alzheimer's disease and other dementias, their families and carers. To find out more about fundraising for the Society log on to www.alzheimers.org.uk