/consumer/press/press-releases/2015/article.page?
Skip to content
You are here:
Back to October 2015 Article created: 30th October 2015

Katie Howdon and Kelly Johnson have raised £1,350 for Candlelighters - including £500 in matched funding from Leeds Building Society.

Their 120mph skydive took place at Hibaldstow Airfield. They jumped from approximately 15,000 feet and landed after 15 to 20 minutes.

Kelly Johnson, Assistant Manager at the Society’s Headingley branch said: “I would like to say a huge thank you to everyone who supported us, our generous customers in Headingley and Yeadon for all their donations and Leeds Building Society for providing matched funding.

“The skydive was an amazing experience and all for a terrific charity. It was an honour to be able to contribute to the work that Candlelighters do towards fighting children’s cancer.”

Katie Howdon, Assistant Manager at the mutual’s Yeadon branch said: “Thank you so much for all our donations, support and words of encouragement for the skydive.

“We have raised £1,350 and this will pay for a family of up to eight people to go on a short break to spend quality family time away from a hospital environment and treatment, but close enough to the hospital if need be. 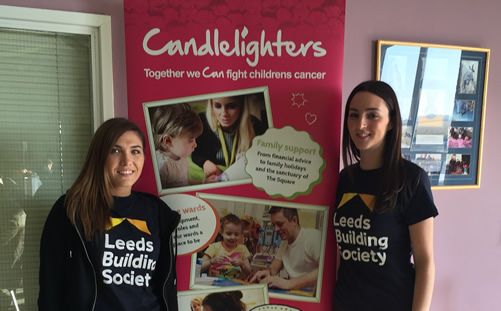