/consumer/press/press-releases/2015/article.page?
Skip to content
You are here:
Back to October 2015 Article created: 16th October 2015

The nine volunteers provided a day of labour to Canada and New Street residents and veterans as part of BBC One special programmes ‘DIY SOS: Homes for Veterans’.

The team took advantage of Leeds Building Society’s volunteering scheme, which allows all colleagues a day’s paid leave each year to help in the community.

One of the volunteers was Rob Clarke, who said: “We had a fantastic day which involved being builders’ labourers for the day and getting stuck in with various tasks such as clearing gardens, moving materials round the site with wheelbarrows, shovelling sand and hardcore for cement mixers and general site cleaning and tidying.

“There was a great atmosphere on the site and a real sense of community spirit in what was being achieved.

“The team got some brilliant feedback for their efforts from BBC producers, with a site foreman describing the team as an ‘army of busy ants’ and our efforts were also praised by some of the contractors.”

As part of the day the volunteers presented three flat screen TVs and a laptop to be used in the refurbished homes.

These items were purchased by the team donating the £400 ‘Great Team Work’ prize they received at the mutual’s employee of the year awards, which was then matched with an additional £400 from Leeds Building Society. 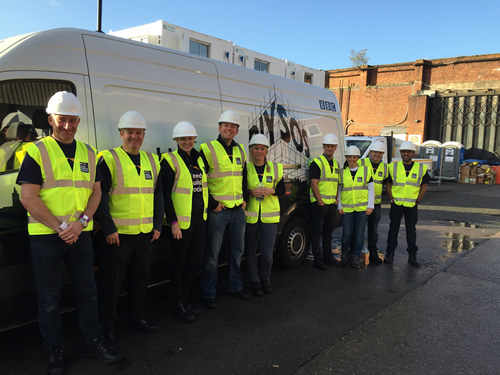 The Society’s mortgage school of excellence is a cross section of colleagues from distribution, underwriting, compliance and training areas that collaborate in order to drive continuous improvement to the service the Society provides to its members for all business received via its direct distribution channel.

The second part of ‘DIY SOS: Homes for Veterans’ airs next Wednesday, 21st October, at 8pm on BBC One.