/consumer/press/press-releases/2016/article.page?
Skip to content
You are here:
Back to September 2016 Article created: 29th September 2016

Leeds trekkers raise over £11,000 for Macmillan and NSPCC

Leeds Building Society’s Distribution team are smiling despite aching limbs after beating the target for their latest charity fundraiser.

They undertake a national challenge annually, which this year was a 127-mile walk along the Leeds Liverpool Canal.

The 18 colleagues began their walk early morning at the start of the canal at the docks in Liverpool, and finished a couple of afternoons later at Granary Wharf in Leeds.

They beat their original fundraising target of £10,000 for Macmillan and the NSPCC to raise £11,500 in total – including £1,000 in matched funding from Leeds Building Society.

Trevor Garside, Leeds Building Society’s Head of Direct Distribution, said: “We are very pleased to have successfully completed our walk, and delighted to have beaten our fundraising target for Macmillan and NSPCC.

“The trek, whilst on paper less daunting than some of our previous charity challenges, definitely took its toll with several walking wounded by the end of it.

“Our branches joined in the fundraising effort with a variety of activities including sponsored cycles, raffles, tombolas, silent auctions, tea parties, book sales and quizzes.”

Further donations can be made in the Society’s branches or online via http://uk.virginmoneygiving.com/team/tttchallenge. 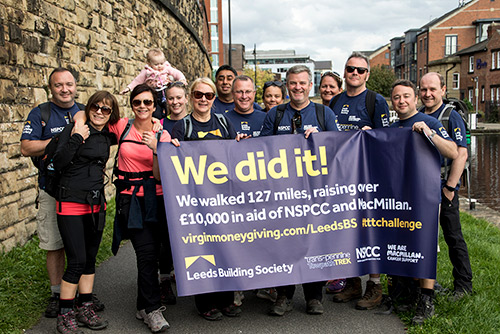 Charity Walk in the Transpenines

Please see attached, pictured, the walkers at the end of their trans-pennine towpath trek.