/consumer/press/press-releases/2016/article.page?
You are here:
Back to November 2016 Article created: 1st November 2016

A runner from East Boldon covered 155 miles by completing 12 running events in 12 months for a cause very close to his heart.

Matthew Platten ran for over 22 hours in 2016 to raise £1,530 for Motor Neurone Disease Association in memory of his dad Graham, who passed away from the disease in December 2009.

Matthew is originally from Durham and works in the Mortgage Lending team at Leeds Building Society’s Cobalt office.

His running schedule for 2016 started in March with the Silverstone Half Marathon and included the Sunderland City Half Marathon, Mersey Tunnel 10k, Great North Run and Robin Hood Half Marathon.

Last weekend he completed his final event of the year – the North Tyneside to Newcastle Half Marathon.

“It was the hardest event of the lot due to the ridiculous amount of hills! It was tough going but I finished in a time of one hour and 48 minutes,” said Matthew.

“I’d like to thank everyone for all their donations this year; it has really helped keep me going. I now have a couple of weeks’ rest before commencing with training for more challenges in 2017.”

Matthew has already signed up for six events in 2017 including his first full Marathon and a 24 hour relay where he will be running with a fellow Motor Neurone Disease fundraiser to complete a minimum of 40 miles during the 24 hours. 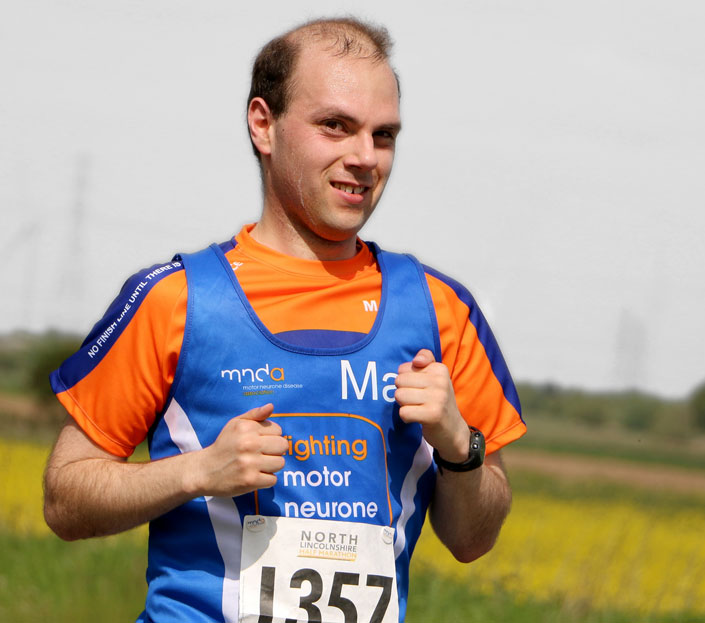 Matthew Platten is pictured during the North Lincolnshire Half Marathon on 15th May (his fastest half marathon of the year at 1 hour, 41 minutes and 34 seconds).

The Motor Neurone Disease (MND) Association is the only national charity in England, Wales and Northern Ireland dedicated to improve care and support for people affected by MND, fund and promote research, and campaign and raise awareness so the needs of people with MND are addressed by society. Visit www.mndassociation.org