/consumer/press/press-releases/2017/article.page?
Skip to content
You are here:
Back to July 2017 Article created: 4th July 2017

A mortgage product manager at Leeds Building Society has raised £1,600 for charity by trekking 40 miles across the North York Moors.

Simon Halladay completed the Lyke Wake Walk between Osmotherley and Ravenscar in a time of 12 hours and 45 minutes.

He picked this 40 mile challenge because he recently celebrated his 40th birthday.

Simon has raised £1,600 for the Lymphoma Association – including £400 in matched funding from Leeds Building Society.

He chose this charity after previously being diagnosed with non-Hodgkin's Lymphoma - this August marks the 12th anniversary of finishing his treatment.

“The day involved a 4am start and although the rain over the previous week made it interesting the bogs weren’t as bad as I feared and the weather was kind on the day,” said Simon.

"Despite being one of the most common cancers in under 30s, for many people diagnosis is the first time they have heard of lymphoma and this is where the Lymphoma Association comes in.

"They work tirelessly to ensure that everyone affected by lymphoma in the UK has the best possible information, support, treatment and care and they rely on donations to enable them to continue their valuable work.

“I would like to thank everyone who has sponsored me and Leeds Building Society for providing matched funding.”

Simon Halladay manages Leeds Building Society’s mortgage retention team, and is based at its head office in Leeds. He is originally from Richmond in North Yorkshire and now lives in Baildon.

Donations for Simon can be made via https://www.justgiving.com/fundraising/Simon-Halladay3 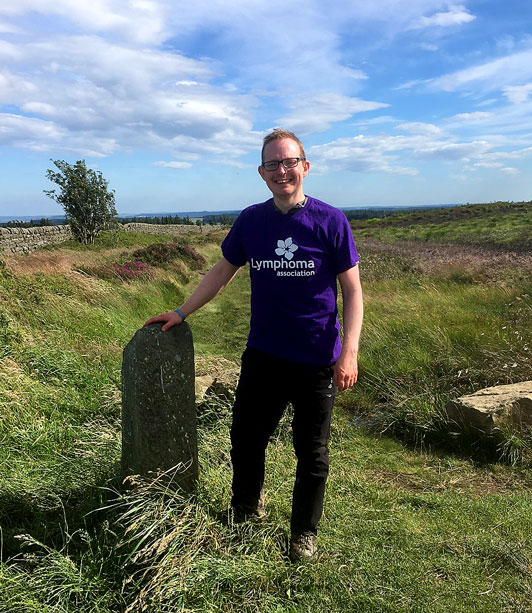 Simon is pictured at the finishing ‘stone’ in Ravenscar.

The Lymphoma Association - Charity Registration No. 1068395