/consumer/press/press-releases/2017/article.page?
Skip to content
You are here:
Back to December 2017 Article created: 11th December 2017

If you want to give visitors a warm welcome to your home – paint your front door red, say Leeds Building Society members.

Red was the top choice when the Society asked members which colour was the most welcoming for the main entrance to a property.

Almost one in five (19%) plumped for that hue, but white wasn’t far behind, scoring 18% of the vote.

Blue was in third place, with 12%, just ahead of a natural wood finish, which was the most popular non-colour choice.

In descending order of appeal, green, black and yellow brought up the rear in the vote, with 7%, 4% and 2% respectively.

Stephen Westland, Professor of Colour Science at the University of Leeds, said the results showed how colours can become associated with positive and negative emotions.

“It’s therefore no surprise that yellow doors scored poorly in terms of how welcoming they are, while blue doors scored well.

“It was interesting that in this study red and white both score highly as welcoming colours for doors and that black, as well as yellow, scores poorly.

“I’ve been puzzling over why red is the most popular choice – as it’s such a warm colour, it literally might communicate that the interior or the owners are warm and welcoming.

“Black is often associated with concepts such as formality and this is one reason why few respondents selected black as a welcoming colour.

“Colour is important for several reasons, not least because it can convey meaning, not just in an abstract sense but also in real-world applications, depending on context and culture.”

Leeds Building Society members were polled on their views on welcome door colours as part of a wider survey asking how they prepare their homes for winter.

The most common maintenance jobs at this time of year were servicing the boiler (64%) and clearing gutters of autumn leaves and debris (43%), although one in five respondents said they weren’t taking any specific actions to make their homes ready for winter.

In the garden, cutting back plants was the top priority (for 70% of respondents), while almost half of respondents (49%) were taking steps to put away outdoor furniture or take steps to protect it against the worst of the winter weather. Wildlife was another focus, with 39% of people saying they would instal feeders or make more effort to put out food for the birds.

When the hours of darkness are longer, lighting was chosen as the key security measure over intruder alarms or CCTV, with two-thirds of respondents (66%) favouring security lights and more than half (57%) preferring timer switches on house lights.

“Part of our purpose as a business is to help people have the home they want, so we’re always keen to understand how our members make their homes their own,” said Richard Fearon, Leeds Building Society’s Chief Commercial Officer.

“Putting a personal stamp on your property is often seen as a big advantage of ownership over renting and something many people look forward to as they plan their purchase.

“Proud homeowners often invest a lot of effort, time and money in getting their property exactly how they want, to make it into somewhere they enjoy spending time as well as welcoming to their friends and loved ones.

“The front door colour choice was a light-hearted question for members but it’s interesting to get the expert insight into how this decision affects how you and your visitors may feel about your home.” 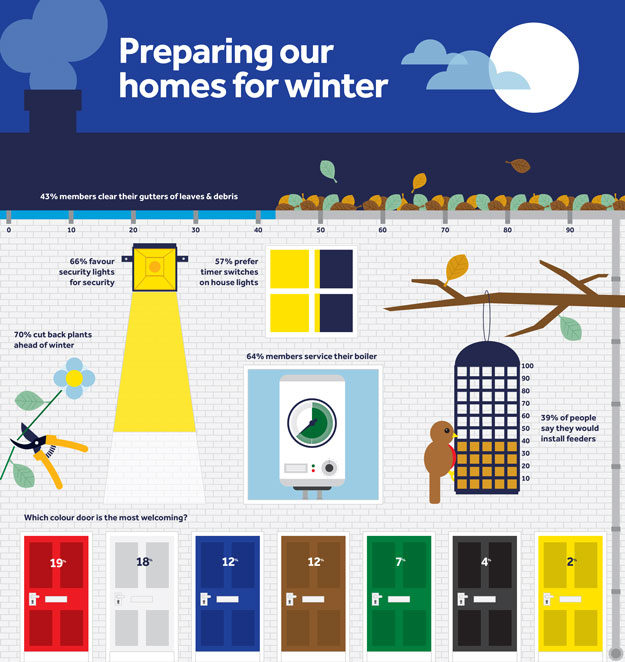 To see the full PDF version click this link.

*The survey, which was undertaken through Leeds Building Society’s customer panel ‘TalkingPoint’, sought the views of 273 members in the month of November 2017.

An infographic of the research results is attached.

Stephen Westland is Professor of Colour Science in the School of Design at the University of Leeds and holds further academic posts at universities in the United States, Thailand and China. He has worked as a consultant for major brands such as Colgate, Unilever, Samsung and Crown Paint, and has won the Royal Photographic Society’s Davies Medal for his work on colour imaging. He can be found tweeting at @stephenwestland

The University of Leeds is one of the largest higher education institutions in the UK, with more than 33,000 students from more than 150 different countries, and a member of the Russell Group of research-intensive universities. It’s a top 10 university for research and impact power in the UK, according to the 2014 Research Excellence Framework, and is in the top 100 for academic reputation in the QS World University Rankings 2018.

The Society won the title of Best Shared Ownership Mortgage Lender in the 2017 What Mortgage Awards, its second consecutive year of success in this category.