/consumer/press/press-releases/2018/article.page?
Skip to content
You are here:
Back to February 2018 Article created: 21st February 2018

Leeds Building Society saves energy to the moon and back

When colleagues at Leeds Building Society wanted to help tackle climate change they didn’t realise they’d cut emissions so much they could have made it to the moon and back almost eight times.

Now, as a result of its commitment to reduce its environmental impact, the Society has become only the second building society in the UK to be awarded the Carbon Trust Standard, a certification that recognises organisations which successfully measure, manage and reduce carbon emissions.

In 2017 the Society reduced its carbon footprint by 1,130 tonnes of CO2, which equates to taking over 530 average-sized petrol cars off the road or clocking-up around 3.8 million miles – equivalent to travelling to the moon and back almost eight times.*

Richard Fearon, Leeds Building Society’s Chief Commercial Officer, said: “As a business we take our environmental responsibilities seriously. Considering how we help to ensure a sustainable future for everybody is the right thing to do.

“The changes we’ve made make perfect sense for our business, our members and the communities we serve up and down the country. I’d like to congratulate our colleagues on their fantastic effort to achieve this prestigious standard.”

The Society took a number of steps to achieve the reduction in emissions. These included replacing around 2,000 old-style lightbulbs with LED lights during a branch refurbishment programme, buying renewable electricity and moving to a new to BREEAM** standard contact centre, near Newcastle.

Morgan Jones, Head of Assurance, Carbon Trust said: “We are delighted that Leeds Building Society has achieved the Carbon Trust Standard for Carbon.

“The award of the Standard is a reflection of the sound emissions reduction practices that the building society has put in place over the last two years, for which they should be congratulated.

“We look forward to further improvements and seeing on-going sustainability benefits for Leeds building Society and their members.” 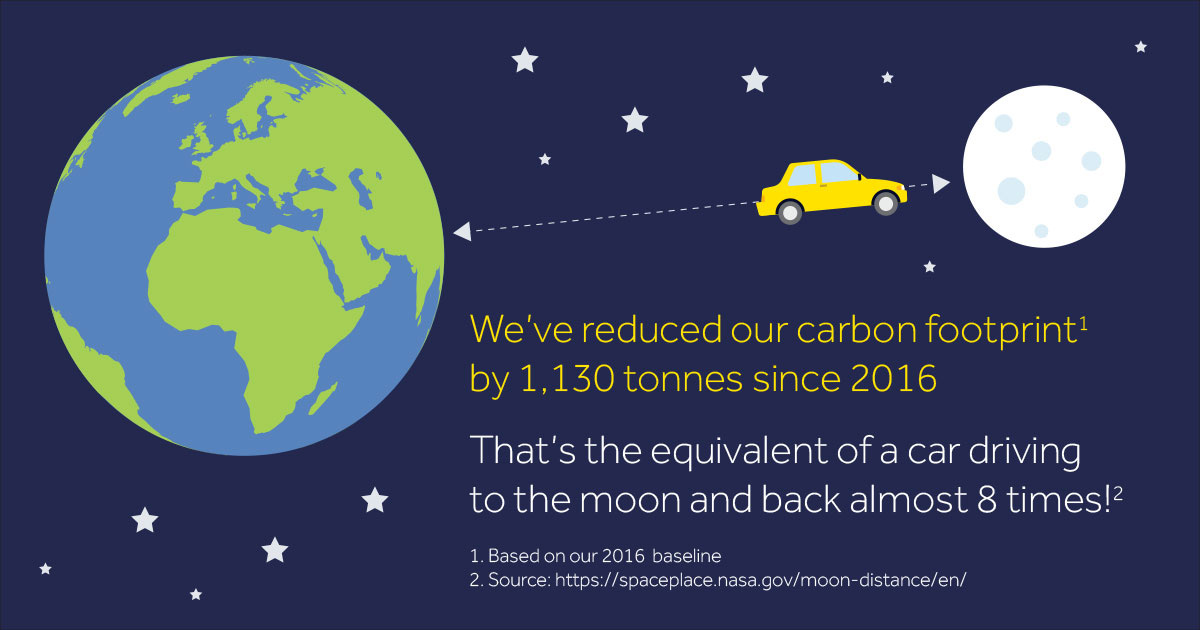 Leeds Building Society has saved so much energy they could have made it to the moon and back nearly eight times.

*The 1,130 reduction equates to taking over 530 average-sized petrol cars off the road (each doing 7,100 annual mile average) or around 3.8m million car miles – using Nasa figures for the average distance between earth and the moon this is equivalent to driving to the moon and back almost 8 times.

** BREEAM is a sustainability benchmark for communities, buildings and infrastructure.

The Carbon Trust Standard is a certification that enables organisations to demonstrate their success in cutting their carbon footprint. It was developed by The Carbon Trust, which works with organisations, helping them contribute to and benefit from a more sustainable future.